Gabriel is one of the victims of the first bombings in Neptune, at the Sea Sprite motel. His relatives in Mexico, including the cartel leader- El Despiadado, ordered Alonzo Lozano and Dodie Mendoza to murder the bomber to avenge Gabriel's death.

Gabriel was a nerd who went to Spring Break with a few of his guy friends. Gabriel was unlucky with women and got rejected many times at the spring break parties.

He was the only one who wanted to study while on spring break, which is the reason he went to the Sea Sprite lobby (bombing location) in the first place. The wifi was broken and he wanted to fix it. 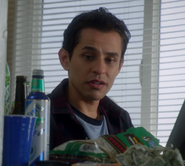 Add a photo to this gallery
Retrieved from "https://veronicamars.fandom.com/wiki/Gabriel?oldid=11949"
Community content is available under CC-BY-SA unless otherwise noted.
FandomShop DC Trivia GalaxyQuest