Veronica Mars (movie)
TBD
Season Four of Veronica Mars is a limited series of eight episodes that aired on Hulu. On August 21, 2018 it was announced that Hulu is finalizing deals for an eight-episode limited series and revival of this cult classic.[2]

The entire season was released on the Hulu streaming service on 19 July, 2019.

Spring breakers are getting murdered in Neptune, thereby ruining the seaside town’s tourist industry. After Mars Investigations is hired by the parents of one of the victims to find their son’s killer, Veronica gets pulled into an epic mystery that pits the town's rich elites, who would rather put an end to the month-long bacchanalia, against a working class that relies on the cash flow from the tourist industry in the town. 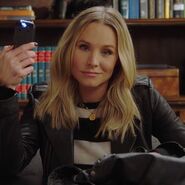 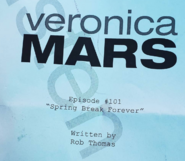 Add a photo to this gallery

Add a photo to this gallery

Retrieved from "https://veronicamars.fandom.com/wiki/Season_4?oldid=12607"
Community content is available under CC-BY-SA unless otherwise noted.