Gods of War
Years, Continents, Bloodshed is the 8th and final episode of the fourth season of Veronica Mars.

Veronica and Keith follow a new lead, and discover another victim. Matty follows her own instincts, landing herself dangerously close to a killer.

Matty Ross returns the red car that Big Dick tried to bribe her with. He parks it in his garage, and Matty sneaks out of the trunk after he's left, with the intention of breaking into his home to prove that he is the bomber once and for all. She bugs the place and starts to download his hard drive, when he comes home.

Dick looks for Matty in the house after he got an alert that there was a break in. He calls Clyde Pickett to come help, but Clyde says no. Alonzo Lozano and Dodie Mendoza also sneak into the house. Dick finds Alonzo in his pool, swimming casually. He asks who he is and why he is there, when Dodie stabs him with a sword in his back. They behead Dick, intending to bring his head back to Mexico to present it to El Despiadado. Alonzo and Dodie seem sad to leave California, but they know they have to.

Matty witnessed the whole murder. She gets her confirmation that he IS the bomber and so she is secretly happy about his death, getting the revenge she wanted all along.

Veronica Mars and Keith Mars, still convinced there is a connection between the Spring Break bombings and the death of a frat guy at spring break years ago, goes back to the frat house to interview one guy. She finds out that four frat guys abused a pizza guy, who had messed up their order, by dunking his head repeatedly in the ocean. Then, in the middle of the night, someone, presumably another frat guy, lit one of the boy's tents on fire, in fear that he would tell (or that's what the assumed story was).

Veronica is very suspicious that a Cho's Pizza guy was involved in this incident. She assumes it was Penn Epner, because the description of the pizza guy was that he resembled "Frodo". She goes to verify this claim by looking at pizza tickets from the night in question at Cho's. Matty helps her and Keith look through boxes of tickets. Matty finds a ticket with the name "Don" and tells Veronica, who asks Penn. Penn says he knows a Don McNotten who worked at Cho's a while back.

Veronica investigates and finds out that Don lives 30 minutes away, instead of in Washington D.C. like he claims. He is another "Murderhead" who would've known about the nail in Penn's back. Veronica tells Police Chief Marcia Langdon who sends out an APB to arrest Don. Don's place is empty and bomb making materials are found. They think the suspect is Don.

Penn leads Veronica to an abandoned power plant, where Cho employees used to go to smoke. There they find Don with a confession letter and a shot in his head, from presumed suicide. Meanwhile, Keith (who is downstairs) receives a call from Matty who said the ticket with Don's name on it was out of order, so it doesn't make sense. It looks like the ticket was planted.

Veronica and Keith immediately suspect Penn again and arrest him. They ask him where the other bomb is and he claims not to know. Veronica realizes a bunch of people are at the opening of Kane High School, including Matty and Wallace Fennel. She races over there, suspicious there is a bomb in the area, and evacuates everyone with 1 minute to spare before the bomb goes off.

Keith and Veronica drive Penn to the bomb scene, knowing that if he is the bomber, he will reveal the bomb location before getting blown up. Keith risks his life in the bomb area as he sits with Penn, waiting for him to spill where the bomb is. Penn cracks and admits he's the bomber and shows Keith where the bomb is. They both disable it, saving everyone. Penn is then arrested. He tells Veronica that there will be a movie made about him and that he "always has contingency plans".

Keith receives the US$ 250,000 reward and good news about his health - he's not losing his mind, it was just a bad combination of medications that is an easy fix. Veronica later goes to city hall to marry Logan Echolls. The wedding is small, with only Wallace and Keith present. They get married!

At home, they start planning their impromptu honeymoon. Logan leaves to go move the car on the street because of street cleaning. Just as he gets in the car, Veronica remembers a limerick from Penn's bomber letter and realizes he put a backpack in her car, likely with a bomb. Just as she screams "LOGAN!" the bomb goes off, with Logan in the car. Logan dies and Veronica is absolutely devastated.

The episode cuts to one year later, during the first week of Neptune's spring break. Veronica passes a sign that says "Daniel Maloof for U.S. Senate", indicating that he's running again after all. Spring break in Neptune is officially dead, no college students come to town anymore to party.

A lot of businesses closed down, particularly a majority of the beachfront locations. However, the Sea Sprite Hotel had plans to reopen. Matty Ross ended up being the one who had Tawny Carr's ring. She pawned it to get the money to remodel the place.

Veronica spent the year taking care of her dad after his hip replacement surgery. They took care of each other after the horrific incident with Logan. Veronica started to go to see Logan's therapist, who originally she refused to meet. She mentioned a crime documentary, featuring Penn and the bombing, in which a majority of Americans don't believe Penn did it.

Veronica says she is going out of town for a case and won't be back for a long while. She leaves her dad with Matty, who started to work at Mars Investigations, Pony, and his new girlfriend.

Logan's therapist gives Veronica a voicemail that he left before he died, explaining to the therapist why he wanted to marry Veronica. It was because she was the strongest person he ever met and he respected her so much. The episode ends with Veronica tearing up and driving up the coast, out of Neptune. 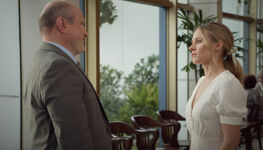 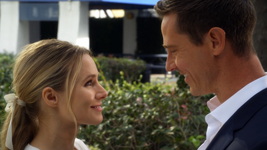 Add a photo to this gallery
Retrieved from "https://veronicamars.fandom.com/wiki/Years,_Continents,_Bloodshed?oldid=12640"
Community content is available under CC-BY-SA unless otherwise noted.